Is Cannabidiol (CBD) Useful in The Treatment of COVID 19?

Is Cannabidiol (CBD) Useful in The Treatment of COVID 19?

Although efforts in vaccine development and deployment are yielding promising results, cases of SARS-CoV-2 (COVID 19) continue to rise globally, even amongst vaccinated individuals [1]. Furthermore, the majority the global population are yet to receive their first vaccine, with many poorer regions of the globe unlikely to receive it in the coming years, if ever. The uncertainties surrounding vaccine efficacy and availability have led to researchers exploring a range of alternative treatments for COVID 19, which include drugs, antibody therapies, and plant extracts.

Cannabidiol (CBD) has displayed anti-viral properties against hepatitis C and other viruses, leading scientists to suggest that it could be worthwhile exploring the effects of Cannabidiol (CBD) on SARS-CoV-2 [2].

A recent study from the University of Chicago has suggested CBD can block SARS-CoV-2 infections in the early stages of disease, and that CBD oil use is associated with a lower risk of infection in humans [3].

Is CBD therapeutically useful for SARS-CoV-2, or is this just another misleading claim regarding CBD’s effectiveness? Keep reading to find out.

Due to COVID’s effects on the upper respiratory tract and lungs, researchers tested the effects of CBD on SARS-CoV-2 viral replication in cancerous human lung tissue.

To test this, researchers took human lung cells, treated them with CBD, waited 2 hours and then infected them with SARS-CoV-2. After allowing the cells, virus and CBD to incubate for 2 days, researchers monitored the cells for the presence of the infamous spike protein, alongside various markers of immunity and gene activity.

To compare the CBD, researchers also treated infected cells with 2 other drugs which had previously demonstrated antiviral effects in HIV, and which they hypothesised may be useful towards SARS-CoV-2 [4].

Below is a graph highlighting the effects of different isolated cannabinoids on the viral replication of SARS-CoV-2 in lung tissue: 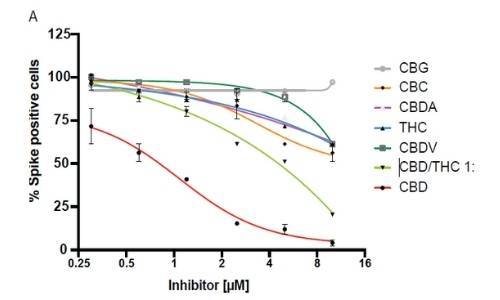 Interestingly, only CBD was able to potently inhibit the replication of SARS-CoV-2, with the other cannabinoids showing limited or no effects. Furthermore, when the scientists combined CBD and THC in a 1:1 ratio, they found that THC reduced the antiviral potency of CBD due to competitive inhibition.

Due to the large number of people taking CBD oil, researchers examined whether CBD supplementation might correlate to a decreased risk of infection with SARS-CoV-2.

Although the findings that CBD offers more protection than other cannabinoids are consistent with earlier lung tissue studies, researchers were concerned that multiple confounding cofactors such as age, race, sex, and clinical morbidities may explain these findings. Therefore, researchers matched 82 patients who were being prescribed CBD as a medicine (Epidiolex®) with patients who had no indication of cannabinoid use, but who had comparable demographic characteristics and clinical morbidities. Only 1.2% of patients who were prescribed CBD contracted SARS-CoV-2 vs 12.2% of the matched, non-cannabinoid using patients. 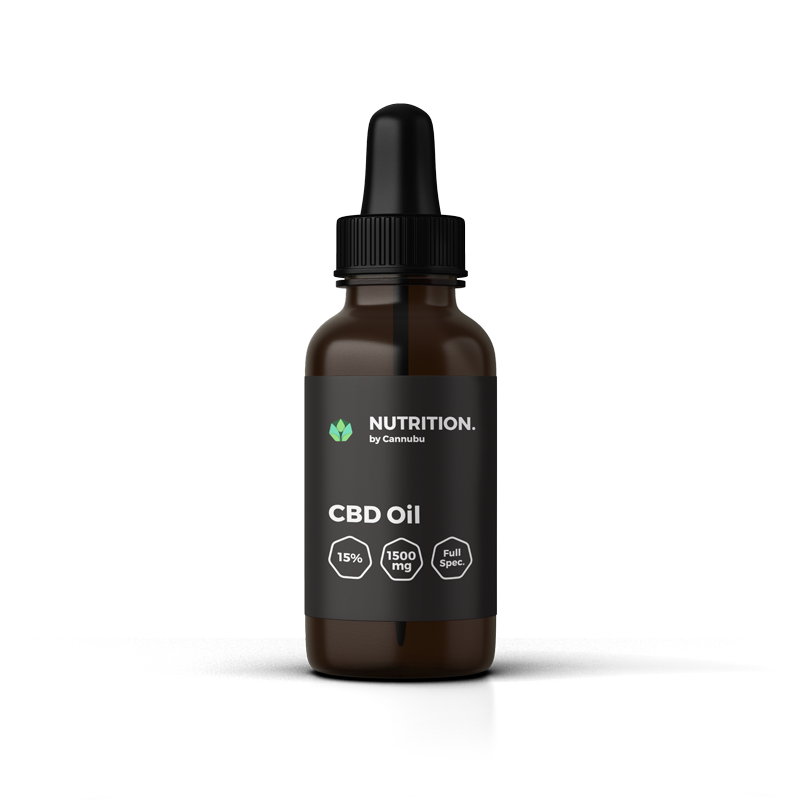 How Does CBD Block Covid Infections?

The researchers suggested CBD can block SARS-CoV-2 infections and help the body fight off the virus by influencing immune system processes that SARS-CoV-2 interferes with. Namely by activating the body’s interferon pathway and by reversing the viral induction of cytokines, which can lead to the deadly cytokine storm in the advanced stages of the disease.

Interferons are proteins that form part of the body’s natural defence system. When cells become infected with viruses, they give off interferons. These interferons act as warning signals to the rest of your immune system, triggering the release of immune cells to fight the virus.

SARS-CoV-2 suppresses the body’s interferon signalling, which in turn lowers your body’s ability to detect and fight the virus [5]. When administered, CBD activates the interferon pathway in cells, helping the immune system to locate and fight the virus. This was a particularly interesting finding, as interferons have been clinically tested as treatments for COVID 19 [6].

What is A Cytokine Storm?

Cytokines are pro-inflammatory proteins produced by various cells in the human body. They are released in response to an infection as part of the body’s normal immune response. A cytokine storm, however, is when the body suddenly releases excessive and uncontrolled amounts of cytokines, which can sometimes lead to multi-organ failure and death – a feature of late stage COVID 19 [7].

CBD was shown to reduce cytokine activation in response to the virus, which reduces the likelihood of cytokine storms within the lungs and affected tissues. These results are in line with previous studies where CBD was suggested to reduce cytokine production in recruited immune cells such as macrophages [8].

The study suggests CBD can block SARS-CoV-2 infections in the early stages of infection and that people who take CBD are much less likely to catch COVID 19 vs those who do not. Due to CBD’s two-fold effect on both interferon signalling and cytokine activation, CBD has the potential to act as an anti-viral agent in the early stages of disease, whilst also helping to protect from an overactive immune system in the later stages of disease.

Although such results are promising, the authors of the study suggest caution, and that people should not look to CBD as a treatment for COVID 19 at this stage. They also highlighted the need for further studies in this area, including human clinical trials to assess CBD’s potential as an antiviral agent, as well as advocating for studies exploring optimal concentrations and delivery of CBD.

If you're shopping for a high quality CBD oil online we've got it covered.

From our high strength 1500mg CBD oil through to our best selling CBD capsules, Cannubu have a range of products to suit your needs.

Want to know which product is best for you? Check out our CBD oil dosage guide.